Pocket Gophers and How to Control Them 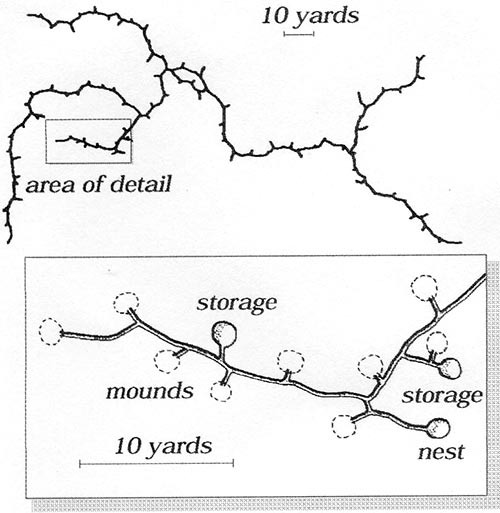 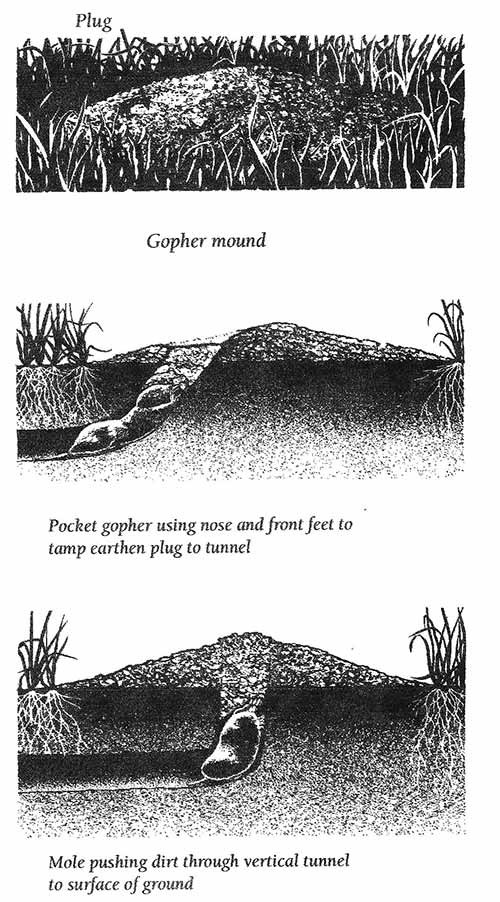 Pocket gophers are medium sized burrowing rodents ranging from 5 to nearly 10 inches long and live underground almost all the time. They are called pocket gophers because of their fur-lined cheek pouches outside of the mouth, one on each side of the face. These pouches or "pockets" are used for carrying food. They are active year round. They are powerful diggers and have front paws with large claws.

The pocket gopher digs with its claws and teeth and kicks soil, rocks and other items away from the digging area with its hind feet. Then the gopher turns over and uses its forefeet and chest to push the soil out of its burrow.  Digging conditions are usually optimal year round and mounds can appear at any time. Greater activity will occur in well kept, irrigated areas with much vegetation. The poorer the habitat, the larger the burrow system required to provide sufficient food. Gophers also gnaw and damage plastic water lines and lawn sprinkler systems. Mounds on lawns interfere with mowing equipment and can ruin the aesthetics of well kept turf grass.

Burrow systems consist of a main burrow, generally 4 to 18 inches below ground and parallel to the surface, with a variable number of lateral burrows off the main burrow. These lateral burrows end at the surface with a fan-shaped soil mound or sometimes with only a soil plug. Some parts of a burrow system may be as deep as 5 or 6 feet. Deeper branches off the main burrow are used as nests and food caches. The diameter of a burrow is about 3 inches, but varies with body size. A single pocket gopher can create several mounds in a day and can construct as many as 300 soil mounds in a year while moving over 4 tons of soil within a few weeks of work. Burrows are continually changing, with old tunnels being sealed off and new ones excavated. A single gopher burrow system will be about 50 feet in diameter.

No one really knows how many linear feet of tunnels a single pocket gopher can construct in a lifetime, but it is undoubtedly in the thousands of feet. Typically, there is only one gopher per burrow system except when mating occurs and when the female is caring for her young.

How to determine if a pocket gopher occupies a tunnel system

An easy method to determine if a pocket gopher occupies a tunnel system is to simply dig open the tunnel. If a gopher lives in the tunnel, the hole will be plugged within a day or two. 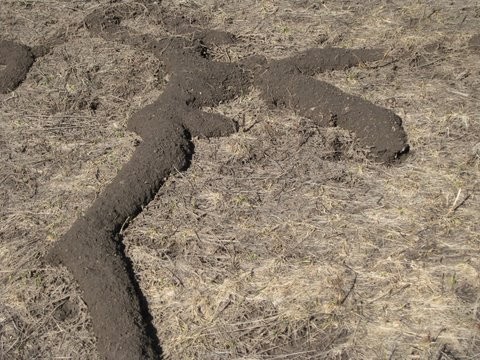 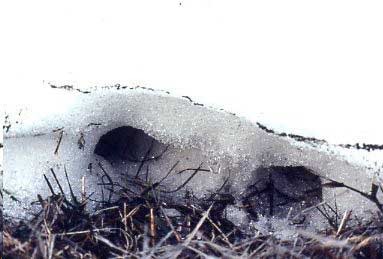 In areas with snow, gophers create burrows within the snow. When the snow melts, long earthen cores on the surface can be seen.

What Gophers Eat & Where They Live

Pocket gophers eat forbs (a non-grasslike herbaceous plant), grasses, shrubs, even small trees. Some preferred forbs include alfalfa, dandelion, and prickly pear cactus. They will move out of fields that are tilled annually because such places lack sufficient food. They may go to the surface, venturing only a body length or so from their tunnel opening to feed on above ground vegetation. They mainly feed on the roots they encounter when digging. Sometimes they pull the vegetation into their tunnel from below. Pocket gophers occupy a wide variety of habitats, from low coastal areas to elevations above 12,000 ft. 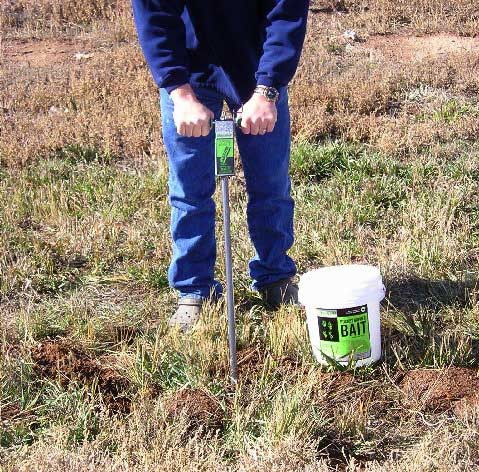 Gopher control is most effective when gophers are active near the surface. First, locate the areas of recent gopher activity based on fresh mounds with dark, moist soil. The fresh soil mounds are the plugged openings of lateral tunnels. The key to controlling gophers is locating the main burrow system for correct bait placement. The main runway generally is found 12 to 18" away from the plug on the fan-shaped mounds and are 6 to 12" deep. Always place pocket gopher bait in the main burrow tunnel, not the lateral tunnels.

Use a metal rod probe to locate the main burrow. You may have to probe repeatedly to locate the gopher's main burrow. When the probe penetrates the gopher burrow, there will be a sudden, noticeable drop of about 2 inches. Twist and rotate to enlarge the hole. Place a funnel in the hole and pour in ½ cup of Kaput -D Pocket Gopher Bait. Do not allow loose soil to cover the bait. After placing the bait in the main burrow, close the probe hole with a sod clump, rock, or some other material such as a wad of newspaper to exclude light and prevent dirt from falling on the bait. Several bait applications within a burrow system will increase your success. Treat three of the freshest mounds within each burrow system (a circle with about 50 foot diameter). Tamp down existing mounds so you can distinguish new activity. The pocket gopher should be eliminated within a week. Re-treat if fresh mounds appear after 2-3 weeks. (click here to order Gopher Bait)

Once pocket gophers have been controlled, level the existing mounds. It is important to monitor the area regularly for re-infestation because pocket gophers may move in from surrounding areas.