All About Voles - Common Questions and Answers 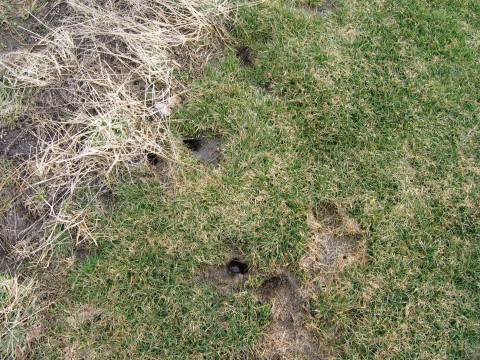 Voles! Voles! And more Voles!  Where there is one, there are many!

If you have voles or signs of them in your yard, you are sure to have many questions.  We have compiled some of our most common questions and answers.

How did voles get in my yard?

Voles are part of the natural landscape.  Voles can cause extensive damage when they move into our turf and landscaped gardens in search of food and shelter.  Where you live and the surrounding habitat will determine what type vole may invade your landscape.  Below ground foraging voles tend to be more abundant at the edges of forested land than in interiors.  Homeowners living in wooded subdivisions are surround by the native habitat of voles.  Each year young voles venture forth from their parent's nest and burrow systems to find their own territories.  Newly planted landscapes with succulent plants and mulch provide ideal locations for dispersing voles to establish new colonies.

Use of our Vole Control Bait Station System can help you gain control over an infestation of all types of voles, safely and effectively, without posing a significant threat to non-target wildlife and pets - learn about the recommended bait here.  Once you gain control, Habitat Modification can help deter them.

Are there different kinds of voles, and which ones are most likely to damage my landscaped garden?

There are 23 species of voles throughout the United States with eight species that are most prevalent and cause significant economic damage.

The pine vole and the meadow vole are two of many that can cause problems in home landscaped gardens.  Meadow voles spend most of their lives above ground, living in and feeding on grasses, and they can girdle small trees and saplings at ground level.  Tall fescue in orchards and lightly grazed pastures are typical habitats.  Unless you have the conditions for the meadow vole to live, you are not likely to have problems with them, whereas the pine vole loves to infest our landscaped gardens.  Pine voles spend most of their lives under the ground in burrow systems feeding on plant roots.

How many voles are in a colony and what makes up a colony?

There may be two adults, several juveniles, and a nest with up to 5 babies in a family colony.  Adults are thought to defend their home habitat or territory from invasion by other voles.

What approximate size area does a colony of voles comprise?

A below ground foraging vole colony may occupy an area of 40 feet in diameter.  The shape of their home range need not be circular, but in orchards a colony claim the area within the drip line of a mature apple tree.

An above ground foraging vole colony may occupy a territory of 100 feet in diameter surrounding their burrow entrance.

Can below ground foraging voles travel above ground from one planting bed to another?

These types of voles do occasionally go above ground to explore new food sources and disperse to new territories.

Are voles active year round?

Unlike many other small mammals, voles do not hibernate.  Instead, they are active throughout the year.  And depending upon where you live, voles can have four or five litters each year, and in warmer climates can reproduce year-round.  Due to this prolific ability to reproduce, voles can grow their population quickly.

Is it possible to kill 100% of the voles on my property?

In scientific tests of rodenticides, 95% control was achieved in orchard situations when the bait was applied correctly.  There is a distinct possibility that a homeowner could achieve perfect control in discrete areas or plant beds, but compete control over an indefinitely long period is unlikely.  This is why it is recommended that the homeowner use the apple sign test each 6 months after use of the The Vole Control Bait Station System (in the spring and fall) to detect possible re-infestation.

Can I gain control with traps?

Traps can certainly be effective, but will take a great deal more effort on your part.  You can read the pros and cons on the trapping method vs. our system here.

Can I control voles under snow cover?

Voles are active year round and can be controlled year round.  When snow arrives, above ground foraging voles can tunnel under the snow and be protected from predators.  These voles can destroy your turf as well as gnaw the base of your shrubs and trees.  Close mowing in the fall before snow arrives can reduce damage to the lawns.  It is best to anticipate vole problems and start controlling them before snow arrives.  The Vole Control Bait Stations will work under snow cover for all vole types, however, if the snow is too deep (over 8"), you will be unable to monitor the stations effectively and access to replenish the bait will be inhibited.

Can I control voles with Integrated Pest Management (IPM)?

You can deter vole populations and re-infestation, especially voles that forage above ground, by making their habitat less suitable for them.  (See - Habitat Modification)

I think I have voles but wonder if I have moles.  Can I have both? How can I tell the difference?

Moles and voles cause different types of damage.  Moles make raised burrows in your lawn, ground cover, and shrub areas and their tunneling activity raises the soil into ridges.  They are searching for worms and grubs to eat - not roots.

Voles, on the other hand, cause damage to plants.  They feed on plant roots, flower bulbs, your favorite hosta varieties, and the growing tissue of shrub and tree roots.  Above ground foraging voles make clipped pathways in the lawn areas as well as gnaw and girdle trees and saplings at the ground level.  Below ground foraging voles such as the pine vole like to make tunnels or runs along house foundations, stone walls, and among perennials and ground covers.  They are also attracted to fallen birdseed from feeders.  Look for their presence by locating their circular burrow entrances not more than 1" - 1 1/2 " in size and by lifting mulch to reveal long narrow trenches or runways that ar serpentine, and that wind around obstructions.  A burrow system may house many voles.  Their tunnel system makes the soil feel soft and spongy under foot.  Many times moles are blamed for this damage because voles can use mole tunnels to reach plant roots and bulbs.  Learn more about how to tell the difference between moles and voles here.  For more information on voles click here.